When Spinosaurus Ruled The Seas... 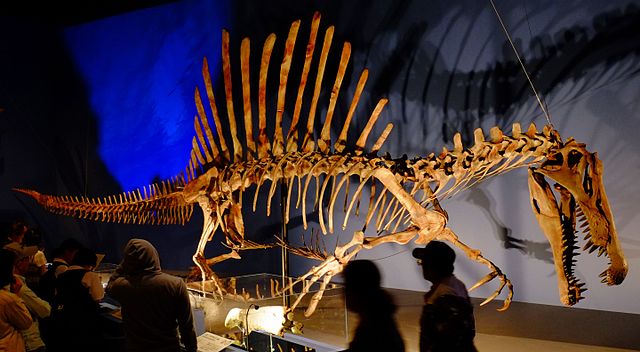 Imagine you’re exploring the Cretaceous period, when suddenly, a Spinosaurus starts chasing you! You think about hiding in a shallow river nearby since dinosaurs can’t swim, right?

Unfortunately for you, researchers have found that the largest and scariest dinosaur to ever exist was also a decent swimmer!

Researchers have discovered a 95 million-year-old complete fossil of a Spinosaurus aegyptiacu tail in southeastern Morocco that indicates the gigantic theropod could, in fact, swim.

The Spinosaurus was a carnivorous dinosaur that walked on two legs. It was fifty feet tall, weighed seven tons, and had a unique tail with long spines growing out of its back.

The Spinosaurus was also known to eat fish based on some of its other features. However, scientists previously believed that the Spinosaurus could only waddle in water, swiping the fish out like grizzly bears. Clearly, the Spinosaurus is more aquatic than we thought.

What Do Findings Reveal?

The researchers behind the discovery used models to analyze the structure of the tail, which they found to be very distinct from other theropods. The tail was surprisingly super flexible and could move in many different directions.

The scientists concluded that the Spinosaurus swayed its smooth tail from side-to-side to propel itself in water. The tail was specifically adapted to thrust the dinosaur forward, similar to how an oar pushes a boat. This allowed the dinosaur to hunt its food in the water instead of waiting for fish to come close to it.

How Does It Change Our Understanding?

Before this discovery, scientists didn’t have clear fossil evidence to prove that the Spinosaurus was aquatic.

Some researchers had a hunch based on the dinosaur's features. For example, the Spinosaurus had a long thin skull forming a snout like a crocodile, along with nostrils closer to the top for easier breathing. Unlike the sharp teeth of other theropods, the Spinosaurus also caught slippery fish with its pointy, cone-shaped teeth. Scientists had also thought its tail was thin, however, this new fossil proves the opposite true.

This is currently the only full fossil of a Cretaceous theropod dinosaur found in Africa. There are no other Spinosaurus skeletons in existence, other than some scattered, unconnected fossils.

The discovery of the complete Spinosaurus tail has provided amazing new insights on the diversity of dinosaurs and their impact on life in water.

The Smallest Dinosaur Ever! (3)

What Killed The Dinosaurs? (4)