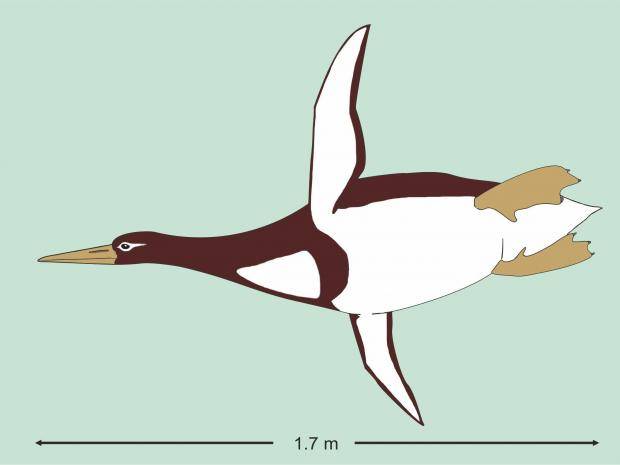 If you’ve ever been to a zoo with a penguin exhibit, you’ll have seen these cute animals waddling on land yet swimming and diving gracefully in water.

Now imagine a penguin that is as tall as a medium-sized adult man and probably outweighs him!

Scientists recently announced the discovery of an ancient penguin species in New Zealand, named Kumimanu biceae, that is estimated to be about 1.77 meters (5 feet 10 inches) and 101 kilograms (222 pounds). The word “kumimanu” means monster bird in Maori, the language spoken by the indigenous Polynesian people of New Zealand, also called Maori. 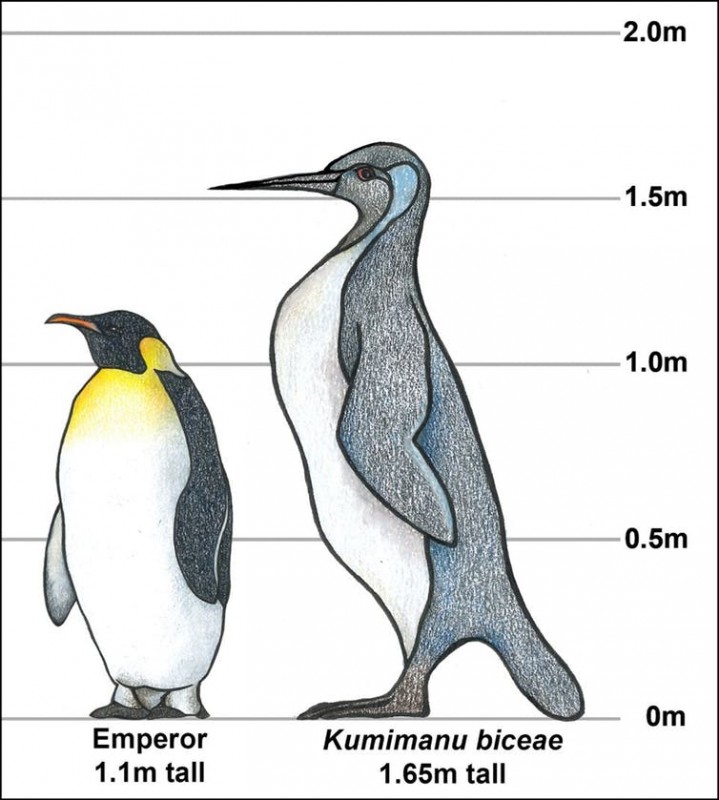 Not only is Kumimanu one of the biggest penguin fossils ever discovered, it is also one of the oldest – about 57 million years old.

When scientists draw an evolutionary tree of penguins such that each branch indicates a separate species, there are many branches. Kumimanu is one of the oldest branches, and it only spanned a few million years before becoming extinct. All of today’s modern penguins are from a younger branch, descended from a common ancestor from 15 million years ago.

Kumimanu penguins are flightless like modern penguins but their beaks and wings are different. Their beaks are like stork beaks - scientists theorize that they were used to spear prey. The wings of modern penguins are rigid and shaped like blades, which help propel them through water at up to 22 miles per hour. The fastest human swimmers don’t even reach 6 miles per hour! Kumimanu wings were more flexible and capable of bending a little.

Impact of the Discovery

Scientists hope that Kumimanu biceae’s age and size will help them better understand the evolution of penguins. 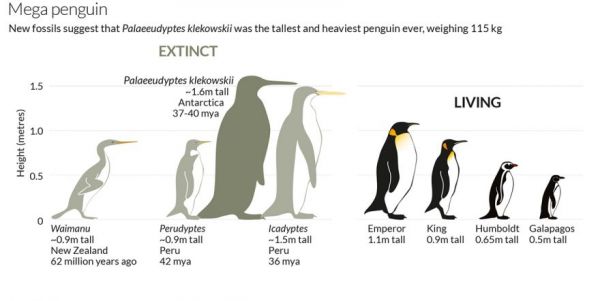 While penguins may not look or move like birds, their DNA indicates they are closely related to bird species like albatrosses and petrels. From studies of bird DNA mutations, scientists are able to estimate that penguins diverged around 66 million years ago at the time of the Cretaceous-Tertiary mass extinction (see Side Notes) on earth. With many larger predators wiped out, penguins likely evolved and adapted to catching their prey underwater without much competition.

While there have been fossils of other giant penguin species, Kumimanu is the oldest, indicating that large penguins evolved very early on in history.  Scientists believe that evolution favors lightweight birds because it is easier for them to stay up in the air, but since penguins do not fly, body size is not a factor. In fact, larger body sizes could help them better hunt prey as well as avoid becoming prey themselves!

Despite the existence of multiple giant penguin species in history, they died out by 20 million years ago.  As mammals moved into the ocean, evolving into whales and seals, they likely outcompeted the giant penguins for food as well as took over safe havens on beaches to mate and raise their young.

The Cretaceous-Tertiary mass extinction wiped out over half of the species on earth, both on land and ocean. Examples include non-bird dinosaurs, marine reptiles, mollusks, and plankton.  Scientists do not know exactly what caused it but there is strong evidence that it is due to a large meteor crashing onto earth as well as massive volcanic eruptions, which affected the global environment drastically.

Where Giant Penguins Once Walked.. (16)