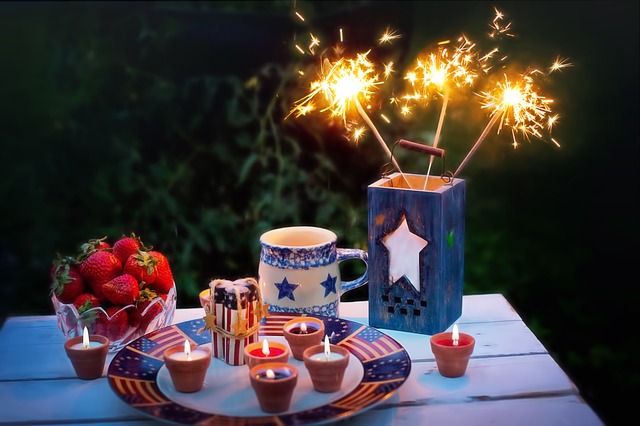 Boom! The dark summer sky lights up with sudden color as fireworks explode in cities across the U.S.

The faint aroma of charcoaled hamburgers and hot dogs lingers in the air, reminding you of the family barbeque you had earlier today. Sticky wrappers of Tootsie rolls and lollipops litter the street, remnants of the boisterous parade which passed by your house this morning. 'I love the 4th of July', you think as you lean blissfully into a chair and watch fireworks leap into the night.

What makes July 4th celebrations so special in the United States? Is it the picnics and barbecues; the fire engines in the parade; the bonfires and fireworks? It’s much more than that.

July 4th is a day for patriotic pride; a day on which Americans unite in soul and remember the origins of their independent nation.

In 1775, the undercurrent of restlessness which had spread through the 13 Colonies of America began to swell rapidly.

Some Americans were growing frustrated with King George III of England and Parliament, who were taxing the Colonies heavily. These Americans, called Patriots, felt that they should not be taxed without having a representative in Parliament. Eventually, most of the nation came to the same conclusion and rebelled against England, refusing to pay what they felt were unfair taxes. Tension mounted. On April 18th, the first shot of the War for Independence was fired.

The Second Continental Congress– a temporary government which would manage the colonial war effort – tried to create a compromise with King George III and Parliament, for they were not yet ready to officially declare war. However, neither side could come to an agreement, and still, the colonists and British troops continued to spar.

Clearly, more drastic measures had to be taken. After a year of unsuccessful attempts to establish peace, the moment of final separation came.

In June 1776, while meeting in Philadelphia, Pennsylvania, the Congress decided that its effort to avoid war was hopeless and appointed a committee to design a formal declaration of independence from England.

Thomas Jefferson, who later became president, was selected to write the document, which came to be known as the “Declaration of Independence”. The Declaration stated that to uphold their rights of “life, liberty, and the pursuit of happiness”, the 13 Colonies had decided to separate from England. It also pointed out all their grievances against their mother country, which were certainly not limited to unfair taxation.

On July 4th, 1776, the Declaration was approved by the Continental Congress and signed by John Hancock, the president of the Congress. Reputedly, Hancock signed his name big and with a great flourish so that King George III could read it without his spectacles!

This act marked the official separation of the 13 Colonies from England. Copies of the Declaration were carried throughout the Colonies, greeted by pealing bells and cheering crowds. The colonists had a long war ahead of them, but they were finally on the road to freedom.

On July 4th, 1777, Philadelphia (capital at the time) became the first city to celebrate the anniversary of independence. The day was observed with bonfires, fireworks, and 13-gun salutes. Other cities were quick to follow suit, and since then it has been celebrated around the country along with parades and patriotic speeches.

July 4th, or Independence Day as it later came to be called, became a national holiday in 1870. It has grown to be one of the most widely celebrated secular holidays in the U.S – each year, Americans consume over 150 million hot dogs and spend over $825 million on fireworks.

This July 4th, as for the past 243 years, Americans across the nation will don their patriotic red, white and blue clothing; attend parades and cookouts; and watch fireworks to celebrate the birthday of their free, independent nation!