Indonesia's Mount Agung: Will It Erupt?

Last week, Indonesia announced an evacuation zone of 6 miles around Mount Agung, an active volcano on the island of Bali.

Mount Agung has been erupting for over two weeks, sending clouds of steam, ash and volcanic particles thousands of feet into the air. The ash cloud has caused many airlines to cancel flights into and out of Bali because the particles can cause airplane engines to fail.

Did you know that Indonesia has over 130 active volcanoes! It lies in a region of our world known as the Ring of Fire which includes Japan, Indonesia and the western coast of North and South America. This region is prone to earthquakes and volcanic activity.

What is Mount Agung?

Mount Agung - its Indonesian name Gunung Agung means Great Mountain - is the highest point in Bali. It is a stratovolcano, one of four classifications of volcanoes used by geologists. Some of the most destructive volcanoes like Mt Fuji in Japan, and Mt. St. Helens in the U.S.

Stratovolcanoes typically look like what most people imagine volcanoes to look like – they have steep slopes leading up to a symmetrical cone with a small crater at the top with a vent. Stratovolcanoes contain layers of lava and other types of rocks. The lava is thick and highly viscous, causing eruptions to be explosive.  The viscosity of the lava also gives stratovolcanoes their steep cone shape, because the lava cools before it can travel too far down the slope.

Stratovolcanoes are dangerous because of pyroclastics flows and lahars caused by their eruptions. A pyroclastics flow is a fast-moving super-hot current of gases, ash and volcanic debris that will wipe out everything in its path, like an avalanche. Lahars behave like an avalanche too, but they appear like wet concrete and are formed when water mixes with ash and volcanic debris.

Has Mount Agung Erupted Before? 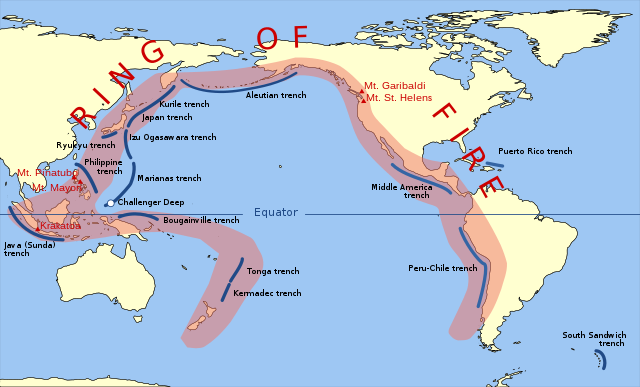 Mount Agung last erupted in 1963, with multiple eruptions over a few months. It killed over 1500 people, primarily due to pyroclastics flows. In addition, the gases emitted into the atmosphere from the eruptions quickly spread around the globe and caused temperatures around the world to drop by about 0.1 to 0.2 degrees Celsius for almost a year.

The cooler temperatures happen because the emitted gases (containing sulfur dioxide) mix with water droplets in the atmosphere to form sulfuric acid aerosols. The aerosols reflect sunlight away from the earth. In addition, the aerosols are so lightweight that they can stay up in the atmosphere for months and even up to 3 years.  Eventually, they get bigger and fall back to earth, but until then, they have an effect on the world’s temperature.

Coming back to today, geologists cannot predict with certainty when and if Mount Agung will erupt. The volcanic activity can remain at its current level, increase or even stop.

But in the meantime, Indonesian officials are not taking any chances. They have triggered the country’s highest level of alert for natural disasters and continue to encourage residents to evacuate to safer places.

Pretty cool when I grow up I want to be a geologist.

What are the different types of volcanoes?

Alaska's Volcano Has Airlines On Alert (4)