Have You Seen Comet Neowise? 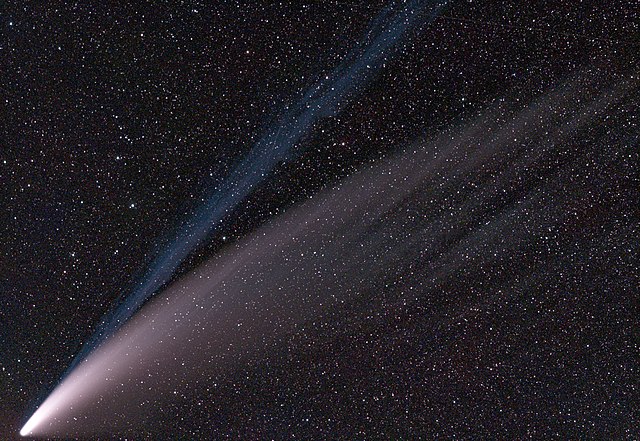 Have you ever wondered what’s in the night sky?

Of course, there are stars and the moon, but occasionally, it is also possible to see other objects, like comets.

Comets are rare and usually impossible to see without a telescope. However, this month, Comet Neowise is visible from Earth without the aid of a telescope. And the most exciting part about it all -- this visitor comes only every 6800 years!

Let’s take a closer look at what Comet Neowise is and how to view this rare occurrence.

What is Comet Neowise?

Comets are balls of frozen rock, dust, and gas that orbit the Sun. They are considered to be leftovers from the formation of the solar system.

Most comets are located in the Oort cloud, a sphere of icy objects surrounding the Sun -- and Neowise is no different. Comets typically have one or two tails, which form when the heat from the Sun breaks up the dust (dust tail) and vaporizes the ice into a gas (ionic tail).

Neowise was first discovered on March 27, 2020, by one of NASA’s telescopes known as NEOWISE. Using this telescope’s infrared capabilities, scientists deduced the comet's size, composition, and age.

After this initial discovery, NASA’s Parker Solar Probe was able to take pictures of the comet at good angles, which allowed researchers to predict its path. Neowise has an unusually long elliptical orbit around the Sun, which is why it is only visible every 6800 years from the Earth. After getting close to the Sun earlier this month, Neowise is now on its way out of our solar system.

Comet Neowise is only visible from July 15 to July 23, right after sunset. Since it is visible to the naked human eye, a telescope is not required but is recommended to get the best possible view of the comet.

To make it easier to spot Neowise, it is best to be far from city lights and to make sure there is no object blocking your view of the sky. Look for the Big Dipper, which is on the northwest horizon, then look directly below it and search for a star that looks a bit blurry and seems to have a streak of light behind it.

It may take a while to spot Comet Neowise, but be patient, as you do not want to miss this once in a lifetime opportunity to see a majestic comet!