Why Is Measles On The Rise?

A disease that we thought we had conquered, is making its comeback in the U.S and around the world.

More than 101 cases of measles have surfaced, with half of them in the U.S states of Washington and Oregon alone since the start of 2019.  Last year, there were 372 reported cases with some brought back from travelers to Israel and the Philippines.

While Europe is also seeing an increase, the situation is worse in the Philippines where more than 70 people -- mostly children, have died in the past month. Health officials are scrambling to contain the contagious disease as the number of reported cases have risen up to 4,500. 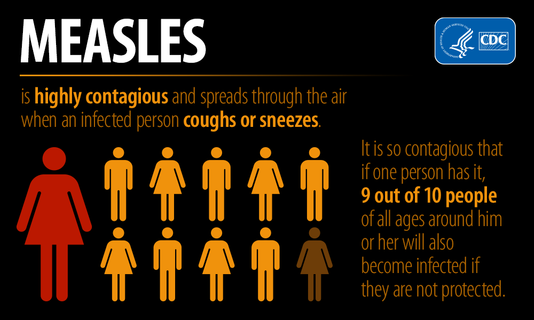 Measles is an upper respiratory infection that starts off with flu-like symptoms such as a cough, runny nose, and high fevers. Within 3-5 days, rashes develop on the face and neck and spread to the rest of the body.

Measles is one of the most contagious diseases – much more than polio, flu or Ebola. One patient can affect 12-18 others. Compare this to the influenza (flu) virus where each patient infects two or three others at most. This is because when someone with measles talks, sneezes or coughs, the infected droplets linger in the room even after the sick person has left. An unsuspecting person can catch the infection just by entering the room after or touching infected surfaces.

The other problem with measles is the two to three week incubation period – this is how long the virus stays in the body before it starts exhibiting symptoms. This means people who have been infected may travel far and wide, and infect others before they get sick themselves. While most recover from the virus, in some it can lead to complications such as pneumonia and encephalitis (swelling of the brain) that can be fatal.

Today, most children receive two doses of a vaccine known as MMR during the first two years of their life. This vaccine protects them against Measles, Mumps, and Rubella. Before measles vaccines became common in 1963, about three million to four million Americans contracted the disease each year, and 400 to 500 died from it.

Lately, however, many parents are choosing not to vaccinate their infants because of allergies or for religious reasons. Some parents are convinced that vaccines are the cause of autism after a false study was reported in 1998.  Since then many scientific studies have shown that there is no link between MMR vaccines and autism. Yet, the number of unvaccinated children continues to rise.

This recent measles outbreak should be a wake-up call to parents in the U.S. and around the world to vaccinate their children.

The Final Push Against Polio (1)

A Breakthrough Vaccine For Malaria (15)