A Traffic Jam On Mt. Everest 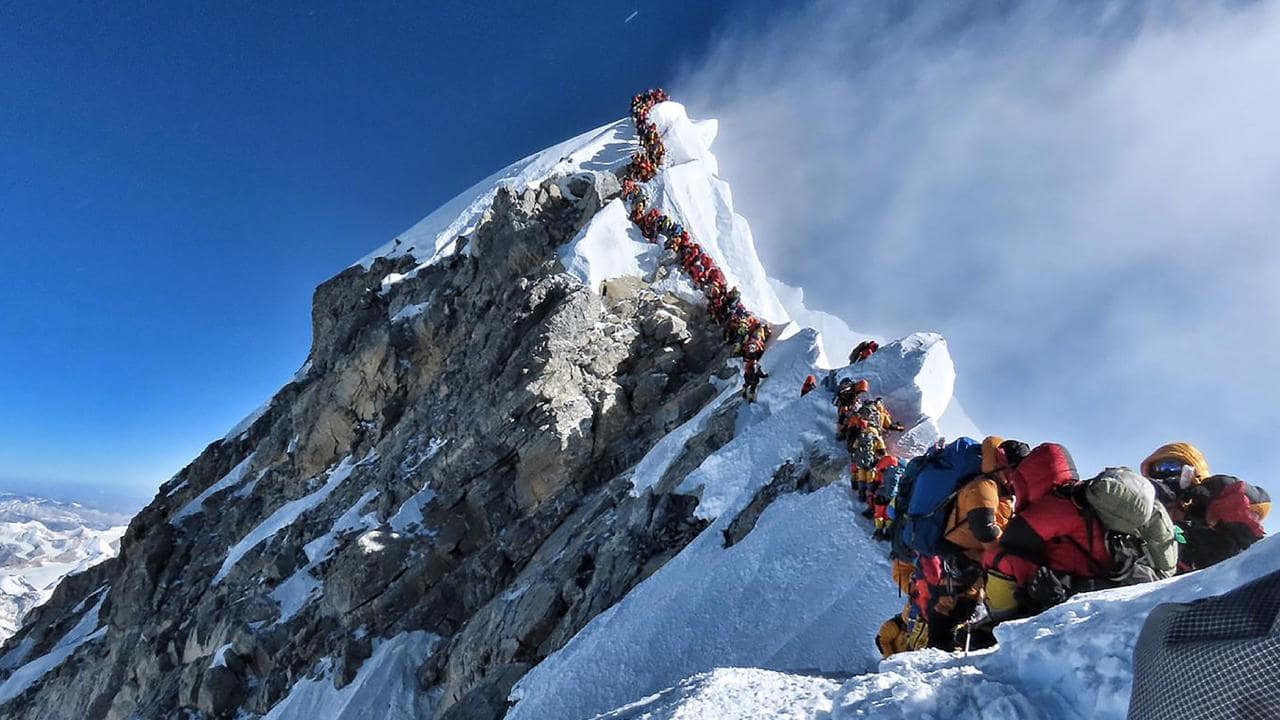 It is every climber’s dream to reach the summit of Mt. Everest. At 29,029 ft, the peak is undisputedly the highest spot on earth. But the trek to the summit is anything but a walk in the park.

Ever since the summit was climbed by Sir Edmund Hillary and Sherpa Tenzing Norgay in 1953, eager climbers try to make the pilgrimage to the top of the mountain every year. The last few weeks of May is the ideal time when the severe weather conditions usually open up for a brief period of time. An opportunity for the brave and the spirited to attempt a trip to the summit.

On one such day in May, there was a bizarre traffic jam of mountaineers as they navigated the "death zone" -- the deadliest trail to the summit. The severe overcrowding resulted in mishaps and loss of lives. We take a look at this extreme sport.

A Conquest No More?

Mountain climbing, which was once a sport for the fittest, has been crowded out by a wave of adventure tourism. Now, numerous climbers make a beeline for the top of Mt. Everest, led by commercial companies. Better equipment and clothing has made it appear all very easy.

However, Everest is a grueling mountain. With just a single icy path to the summit and only a few days of clear weather to climb, the dangers of not moving quickly can be fatal. Today, many buy a spot to the top if they have the means to pay for it, but they are ill-prepared or unfit. These tourists push themselves beyond their capacity in the thrill of achievement, risking not just their own lives but that of others following behind.

More than 200 lives have been taken by the treacherous slopes so far. Eleven climbers have died this year alone. The last stretch to the peak is a narrow path used by both people ascending the descending the summit. With oxygen level at just 30% of what it is at sea level, the human body can shut down from exhaustion very quickly. Climbers have said that the mad rush to the summit makes people unsympathetic to the plight of others who are struggling.

There are two routes to the summit - one from the country of Nepal and the other from Chinese Tibet. Most expeditions choose the route from Nepal, which issued more than 381 permits for the climb this year. But Nepal's government does not check the ability of the climbers nor does it police traffic to the summit.

A Sherpa Sets A Record

Meanwhile, Kami Rita Sherpa, a Nepalese Sherpa has set a record by climbing the summit of Mt. Everest 23 times this year. He climbed twice in the past week alone!

Sherpa is a Tibetan word that means "eastern people", and refers to an ethnic group from the mountainous region of Nepal. Today, Sherpa also refers to local Nepalese and Indian people, typically men, who work as guides and porters for mountaineering expeditions in the Himalayas. Having grown up in high altitude conditions, their hearts and lungs are well adapted to low-oxygen conditions.

Sherpas are incredibly valuable to climbers because of their climbing expertise and their extensive knowledge of the mountains. But they cannot help inexperienced climbers and the mountain is unforgiving.

Sherpas: What Makes Them Superhuman? (2)