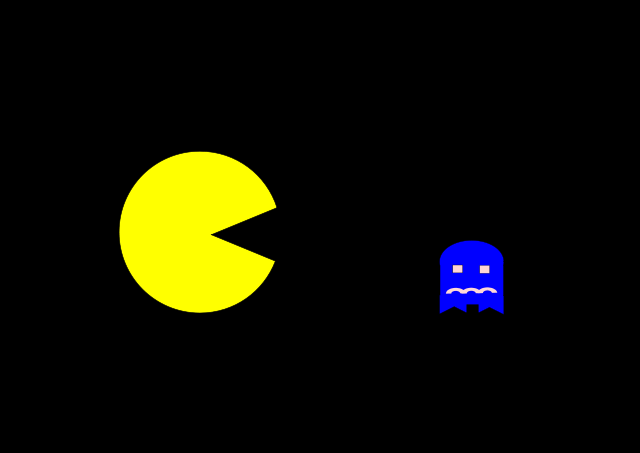 Whether it’s translating phrases, adjusting the thermostat as a home assistant, or even giving us recommendations on Netflix and Youtube — artificial intelligence (AI) already does many different tasks in our lives.

What if, on top of all this, it started writing our video games too?

An AI system named GameGAN, taught by researchers at the computer game company Nvidia, recreated Pac-Man just from watching the game being played!

Excited by this potential, many others are also looking to teach AI to create video games with something called reinforcement learning.

What is Reinforcement Learning?

Reinforcement learning is when a computer program is made to repeat a task over and over, and every time one instance of the task is finished, the program’s performance is judged.

Nvidia used this reinforcement learning to help GameGAN recreate Pac-Man. By watching the game played 50,000 times, GameGAN was able to get a general sense of how Pac-Man worked. Then, with reinforcement learning, GameGAN started to build the game from scratch. Over and over, one half of GameGAN would try to program the game, while the second half would compare this program to the original. Every time the two versions didn’t match, the AI would fix its work and try again.

The Future of Games?

The final product wasn’t perfect — GameGAN’s version had blurry graphics and ghosts that didn’t behave exactly like the real ghosts. But the AI-produced game is still playable — and keep in mind it took 10 engineers working for 17 months in order to create the original Pac-Man.

With AI like GameGAN, games that would usually take millions of dollars and thousands of hours to produce could be done in a far shorter time with a much lower cost. Electronic Arts, a video game company, and the University of British Columbia in Vancouver also believe that reinforcement learning can be used to help AI animate more realistic characters, and are conducting research right now.

In addition, AI might be able to write completely new games. GameGAN had none of the original code and it was still able to recreate Pac-Man. Imagine the games these kinds of AI could make if they were sufficiently trained.

It’s clear that AI has so much potential in the field of games — not only as a player, like the DeepMind program that played Go, but also as a game creator. Still, Electronic Arts thinks it may be years before AI is used regularly in game development, given the difficulty of writing proper reinforcement learning code.

But once all the bugs are worked out, it may not be long before we’re able to play a game written entirely by an AI.

How Video Games Are Made (7)