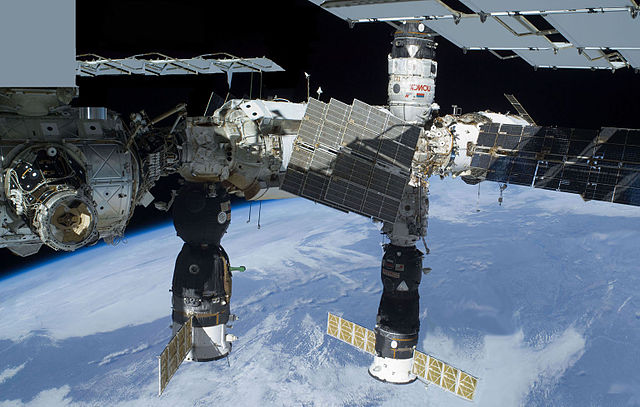 “Earth is the cradle of humanity, but one cannot live in a cradle forever”, Konstantin Tsiolkovsky once wrote. In his book “Free Space”(1883), he drew illustrations of a spaceship orbiting Earth, complete with humans experiencing weightlessness.

This work laid the foundation stone and motivated the launch of the first space station in human history, Salyut 1, in 1971, and ultimately the birth of the International Space Station (ISS) in 2000.

As the ISS celebrated its 20th birthday this Halloween, let’s take a look at its past, present, and future.

In his 1984 State of the Union Address, President Ronald Reagan commissioned NASA to build a space station, Freedom, over the next decade.

The purpose of this mission was to provide a platform capable of sustaining a human crew for research, observations, and furthering space travel. Around the same time, Russia also got to work on building their space station, Mir.

Shortly after the collapse of the Soviet Union in the 1990s, countries decided to work together to best use resources and bolster technology. The ISS was announced as a multi-national collaboration project between the United States, Russia, Japan, Canada, and the European Space Agency (ESA).

The assembly of the space station began with the launches and merging of the Russian and U.S. modules, Zarya and Unity. In 2000, Russia linked another module, Zvezda, and later that year, the ISS received its first crew aboard- astronaut William Shepherd and cosmonauts Sergey Krikalyov and Yuri Gidzenko.

Unfortunately, disaster struck in 2003 and NASA suspended all space travel after the space shuttle Columbia was destroyed and its entire seven-member crew was killed due to technical issues. It was only in 2006 that regular space flights and the addition of newer modules and components to the ISS were resumed.

As the largest human structure in space, the ISS is indeed quite imposing.

An astronaut onboard the ISS mostly operates science experiments throughout the day. Over 3,000 research projects have taken place on board, including studying the effects of microgravity and radiation on humans and animals, growing food, and the study of dark matter and quantum physics. The results from these experiments have led to improved vaccines, cancer treatments, eye surgeries, and water quality and natural disaster monitors. In addition, the crew repair all broken equipment and make sure that everything is in top shape.

The ISS represents an era of global cooperation and collaboration after the Cold War. And now, with the successful launch of SpaceX, the ISS may be open to tourists. The future sure looks radiant for the third-brightest “star” in our night sky!

POPPYCAT33 November 12, 2020 - 3:33am
THE THOUGHT THAT THEY COULD OPEN UP THE ISS TO TOURISTS SOUNDS COOL. IT WOULD BE A WONDERFUL EXPERIENCE. THE VIEW ALONE WOULD BE BREATHTAKING.

Would You Eat Space-Grown Lettuce? (5)