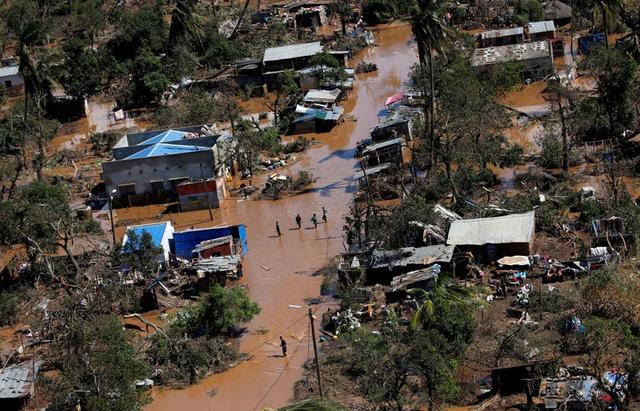 On March 4th, Cyclone Idai formed off the east coast of Mozambique in Africa.

Eleven days later, on March 15th the cyclone first hit land at Beiro, Mozambique. By the time the storm subsided, the African countries of Mozambique, Madagascar, Zimbabwe, and Malawi were completely flooded and the land was destroyed.

This cyclone is by far one of the worst disasters to hit Africa and the Southern Hemisphere. Over 700 people died, and millions of people were directly affected by the storm.

The Role of Climate Change Similar to a hurricane, a cyclone is a large mass of wind that spirals at quick speeds and destroys nearly everything in its path.

Hurricanes, cyclones, and other disasters are not uncommon in certain areas, but over the past few years, these storms have become more intense and more disastrous. While it is not completely certain, an important explanation for this phenomenon is climate change.

As climate change and global warming heat up the earth, the temperature of the waters in the ocean rises, and the sea level rises as well. Tropical storms, resulting from strong winds, high humidity, and warm temperatures in the waters, are more likely to occur when climate change is continuously heating up the oceans.

In addition, the storms are intensified with higher wind speeds and more powerful waves crashing onto the shores. As a result, the countries closest to ocean shores face even more damaging losses. All the countries affected by Cyclone Idai faced similar problems after the devastating storm. Although the cyclone has subsided, rain still continues to fall.

The extensive rain has caused rivers and the dams to overflow, forcing people to climb onto their rooftops. Furthermore, inland oceans -- water gathered in large pond-like areas, have formed across the affected African countries.

For citizens, drinking water has been limited, crops have been destroyed, and waterborne diseases such as malaria and typhoid are likely to spread among the survivors. Cholera cases have already been on the rise before the cyclone, so it is essential that the citizens are provided with healthcare to prevent an outbreak from occurring.

Everything that has been destroyed by the floods now has to be rebuilt, and that will take time and effort. Countries are still trying to rescue and help the remaining survivors, especially the injured, and others who may be trapped in their homes due to the flood. Unfortunately, unstable governments and the lack of basic resources such as electricity add to the challenges.

However, cities have begun their long journey to recovery. Food and supplies are being dropped by airplanes to the victims, and roads and train routes are expected to open very soon. Countries around the world are lending a helping hand in the recovery efforts. While Cyclone Idai is a disaster, it has the potential to unite the world towards a common goal and foster a sense of collaboration and cooperation among nations and people.

A Cyclone Leads To An Avalanche (21)