Today Egypt is a place well known all over the world. Egypt’s culture, especially its mythology is studied and valued by many but what led to the rise of Egyptian civilization? Well, a very long time ago an offshoot of the Nile River, called the Blue Nile, used to flood its banks annually which led to the fertility of the Nile Valley.

Because growing crops were so easy, due to the large amounts of water, people began settling in what eventually became modern-day Egypt. Now, a fight for this river's water is worrying Egypt and dividing countries in North Africa.

The Nile is the longest river in Africa, flowing through 11 countries of the continent. It has two major tributaries, the White Nile and the Blue Nile. The White Nile is named so because of the light-colored sediment that gives the river a light gray color. It originates in Central Africa and is longer of the two tributaries.

However, it is the Blue Nile which is the source of almost 85 percent of the river's water. It begins in Lake Tana in northern Ethiopia and flows into Sudan where it meets the White Nile in Khartoum - they then flow to Egypt as the Nile River.

In a 1929 treaty written by Britain, Egypt was guaranteed two-thirds of Nile's water and given the power to veto any project by countries that are upstream. In 1959, Sudan and Egypt agreed to split the waters, but many other countries including Ethiopia where the river originates had no say. Until now... 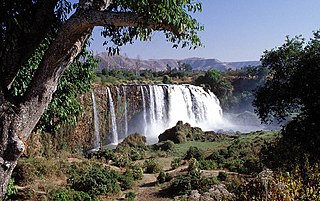 In the latest move, the Ethiopian parliament unanimously accepted the new Nile River Agreement, a deal signed by five other countries that are in the Nile River basin - Rwanda, Tanzania, Uganda, Kenya, and Burundi. Ethiopia has also started building a dam by diverting this river, which has angered Egypt.

Ethiopia has started a $4.7 billion hydroelectric dam as part of a program called The Great Ethiopian Renaissance Dam, in hopes of harnessing 6,000 megawatts of power. Ethiopia held a diverting ceremony that shifted the river 550 meters from its natural course. The diversion will take water that would have gone to Egypt and its neighbor, Sudan.

The Nile River is Egypt’s main source of water and many worry about what will happen when the Blue Nile is diverted for Ethiopia’s dam. Unlike other Nile Basin countries, Egypt does not have readily available alternative water sources.

With the unrest in Egypt, the concern over Nile's waters may not be at the forefront now. But it could become a hot-button issue with Ethiopia forging ahead on the dam construction.