It has been a week since the devastation caused in Houston, Texas by tropical storm Harvey. As pictures emerged last Monday of flooding and people stranded on rooftops, Harvey brought back memories of Hurricane Katrina that hit New Orleans in 2005.

However, Harvey was very different from Katrina. It dumped more than 50 inches of rain in Houston and surrounding areas, the greatest amount of rainfall ever recorded from a single storm. What does 50 inches look like? Imagine 19 trillion gallons of water, enough to raise the water level in the Great Lakes by almost one foot!

This excessive rainfall led to dams and reservoirs overflowing and flooding neighborhoods, even though engineers tried to divert water in a controlled manner. Parts of Houston are still under water, and the estimated cost of recovery from the storm is $180 billion.

However, even as Texas struggles to clean up, the Caribbean islands and Cuba are bracing for Irma, a Category 5 hurricane that is heading for the region this week.

"Children Of The Tropics"

Most storms and hurricanes that affect the United States and the Caribbean islands are born off the coast of Africa, near Cape Verde Islands. They are all children of the tropics, and hence called “tropical storms.”

For storms to form, the conditions have to be just right: water temperatures of 80 degrees F or more, and winds that don't change much in speed or direction. And that is just what happens in late summer over the Atlantic Ocean. As ocean temperatures rise, the air above the ocean's surface heats up and rises. This causes an area of low pressure to form where the warm air used to be. Cool air from the surroundings rushes in to take its place, which in turn heats up and rises. Meanwhile, the warm rising air condenses to form clouds, which grow in size. This is called a "tropical depression" and typically has wind speeds of up to 38 miles an hour.

As the depression moves over water, it gains in strength. When the winds are above 39 miles an hour, it is called a tropical storm. This is when it gets a name -- "Harvey" or "Irma". The storm begins to take a distinct shape and starts to circulate like a hurricane. As the wind picks up speed, the pressure in the center of the storm begins to rapidly drop giving it more momentum to move and the ability to rotate like a spinning top. 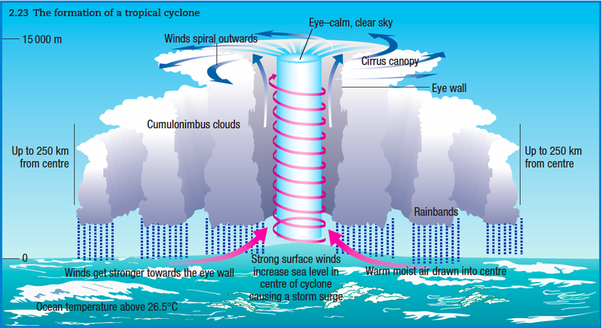 When the winds in this storm reach at least 74 miles an hour, it is referred to as a “hurricane” in the Americas, a “cyclone” near the Indian peninsula, and a “typhoon” in the eastern Pacific. While it takes about one to two weeks for a disturbance to become a depression, it can take just a few hours for a depression to become a hurricane. But take heart in the fact that only a few of these disturbances gain in strength enough to be a hurricane, and depend on the atmospheric and ocean conditions.

Why Was Harvey Different?

Once a hurricane or storm makes landfall, it starts to lose its energy as it is no longer "fueled" by warm ocean waters. Its intensity reduces as it moves further inland.

However, what made Harvey different was that it stalled over the Texas Gulf coast, with warm waters "fueling" the storm and no winds to carry it away. This led to continued heavy rainfall in the region and no place for the water to drain, as the sea levels had also risen from the storm (known as a "storm surge").

Hurricanes are broken down into five categories according to their power and potential damage they can do. Tropical storms and hurricanes are named by the National Hurricane Center by using a six-year rotating list of male and female names. When a powerful hurricane makes landfall and causes extensive damage, its name is retired from the list to avoid future confusion.

All eyes will be on Hurricane Irma this week, as she approaches the Caribbean islands with winds of up to 180 miles per hour.

Yeah... Hurricane Irma was over my dad's mom's Island a little while ago...

Scary to hear wsmecums. Hope your family is safe..