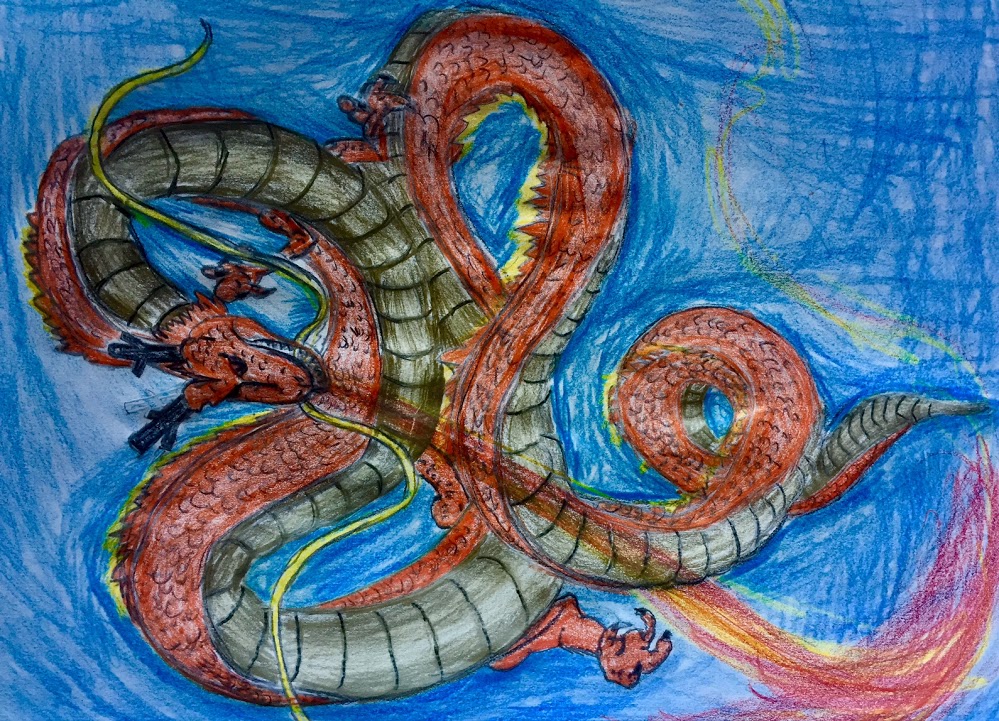 One sunny day, a thousand years ago, the birds were singing and filled a forest with beautiful music. Until an egg fell from the sky and a golden dragon was born. The dragon lived in a large cave with gems inside a magical forest. In the woods, the trees were rainbow, the rocks were shiny, the sky and water was blue, and the animals were creatures like dragons and unicorns. The newborn dragon liked to have fun by making things out of whatever it can find: rocks, sticks mud and more. It ate meat, seafood, berries, fruit, water, and even rocks. When it was born, it was all happy, grateful, active, and a little crafty. Then the rascals found out about the dragon and started to attack it for its scales and meat since they were expensive. The scales were rare and the meat was yummy.

When the citizens of the town attacked it, the dragon became furious and burned their town. After the fire many of the people got injured and even some were killed. The townspeople were dismayed because it took them a long time to build their cottages, lab, farm, storage facilities, and the town hall. The dragon couldn’t stop thinking about it, so he wanted to take more revenge. One morning the dragon saw their new town with everything rebuilt with a fortress wall. After the dragon observed the new town, he set the town on fire after putting rocks in front of the door so they could not escape. The villagers heard the blaze and tried to escape out the door but, it was stuck so they went through the window. The town leaders were unhappy about what the dragon did so they prepared soldiers, catapultes, animals, ballistas, cannons, and a weapon that shot arrows everywhere. The next day the dragon came to destroy the village ,but when he got there all he saw were weapons and brave warriors that woke up early to defend themselves.

The soldiers started to attack him and the dragon destroyed some defenses, but ran away. The dragon was anxious that he could not destroy them. The next day the dragon heard a rumble, a crash, and saw the humans coming with all of their soldiers, weapons, and animals. The dragon ran away and flew to the top of the ravine.  When the dragon saw the people, he shot them with something unusual: lasers. The dragon did this until they had no more power. Meanwhile, in the town the people were planning a attack to destroy the dragon. The people spent two months government in the town hall. But some sailors came and showed them guns. The people thought they would be helpful, so they started to make guns for a month and the army was so big that the town was full of soldiers and everyone had very little space. They launched their army and they saw the dragon they went to it and it did nothing. The people thought it was super strange. They killed the dragon, but it split into two and they realized that the dragon was making replicas of itself! The soldiers saw an entire army of dragons in columns and rows, so they attacked all the clones... but the real one was sleeping on a tree. When it woke up, it hid and destroyed the army.

The battle happened over many years and more sailors came to this land. They decided to stop because it took too much energy and resources. Soon the people did not want the scales and meat because they found some gems that were more valuable. They also had lots of animals they could eat. The dragon and the villagers eventually helped each other. For example, the dragon would take out fires.

The moral, or lesson learned, is that you should not disturb a wild animal because they may attack you. Like in the story, the townspeople hurt the dragon, so their town was destroyed. Also, some  real animals are almost extinct, for example: pandas, polar bears, tigers.​