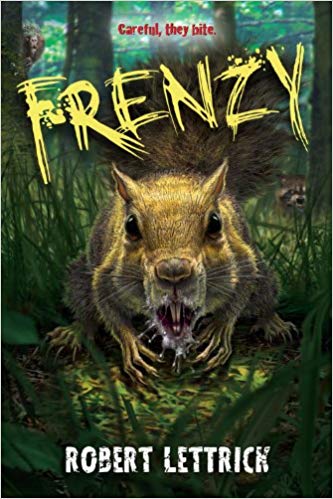 When you first take Robert Lettrick’s adventure book off a shelf, you jump back in fright. There’s a squirrel slobbering, and it looks as if it would jump out of the book at you.

Interesting. You look at the back of the book. There’s a letter from Heath Lambert (a.k.a Scarecrow), explaining the situation and the feebleness of the “adult supervision.”

You flip to the beginning. It’s a song! However, when you read, you start looking behind you. “Why is this so weird,” you wonder. The song describes how student campers have been trapped near Granite Falls, Washington, where animals infected by the virus rabies try to kill them.

In the first part of the story, the protagonist Heath Lambert goes to Camp Harmony, an ironic name due to the perilous situation about to happen. He starts off with a friend of his, Dunbar, who is playing a card game, Zombie Buffet, with him. However, the camp director announces that a water fight was starting, so Heath stopped playing and pulls out his water gun. In the midst of shooting a fellow camper, Heath hears some yelling and running. He jogs over and finds a bully named “Floaties” running around and trying to elude some type of animal. Heath takes a closer look and realizes the slobbering animal carries rabies.

After using a water gun to shoot the large rodent (which turned out to be a porcupine), the beast quickly dropped dead for no reason. As it turns out, all the creatures have hydrophobia, a fear of water itself. A few minutes later, the camp becomes eerily quiet. There are no chirps or humans speaking. Suddenly, a mass of animals run into the camp, killing kids. Heath and his friends run to the livery, where two horses were supposed to be kept (but broke out). After a debate on whether they should leave, they surprisingly have the time of their lives. Read the book to learn more!

Lettrick uses unusual phrases that are funny but emotional. He uses a gaggle of adjectives to clearly explain the bizarre circumstances, slowing down at the right spots, and quickening at the occasional boring scenes. He also uses fiction to teach readers about the symptoms of rabies and how teamwork helps even in the most unlikely situations. He also incorporates a Machiavellian character named Will who thinks of the world as a cunning chess game: always prepare three steps ahead…

Even though Heath survives this apocalyptic encounter, the basic story is not realistic. The possibility of this actually happening is nearly impossible, if not ridiculous. Not all animals can have hydrophobia -- a medical condition which only occurs in eighty percent of rabid animals. As the title indicated, other than the sensible leader Heath, the other campers behaved idiotically. For example, when a rabid moose appears right in front of two campers, they scream and try to run around the faster animal rather than retreating.

Lastly, the author unfortunately uses “Deus ex machina,” in his story, a manufactured happy ending (Don’t ask what the ending is — I’m not telling). The whole premise of the story is preposterous. Nevertheless, Lettrick wrote one the best novels about rabies that races through every single chapter, leaving the reader panting at the end.