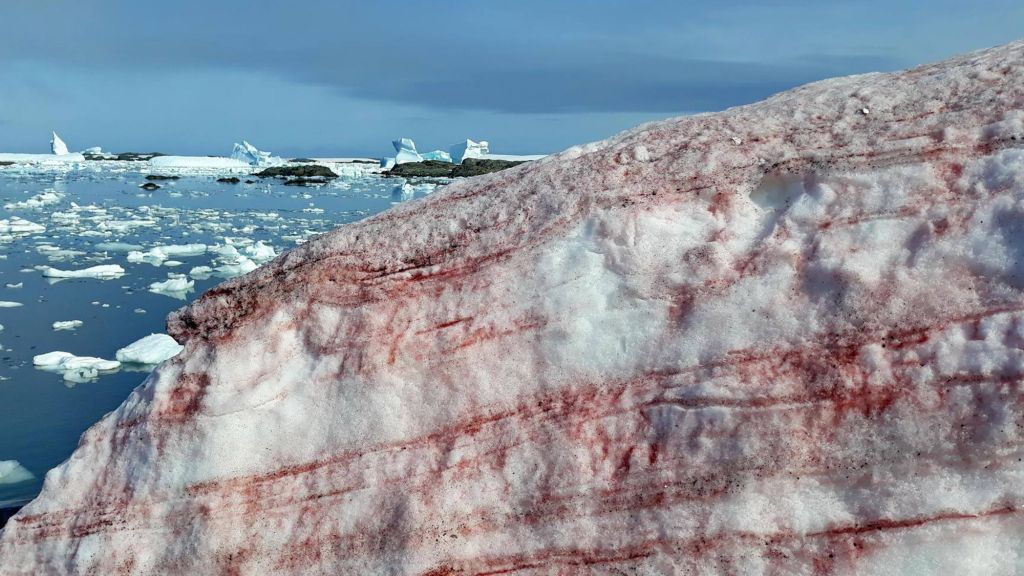 Recently, scientists at Ukraine’s Vernadsky Research Base in Antarctica shared pictures of blood-red snow, referred to as raspberry snow or watermelon snow.

This heavy bloom of red algae is related to unusually warm summer temperatures in Antarctica.

How Do Algae Survive In Winter?

This alga belongs to the Chlamydomonas family and is found all over the world -- from soils and freshwater to oceans and mountains.

These algae survive the cold and harsh Antarctic winters by staying dormant. But, when warm temperatures roll around in summer, they begin to bloom into a distinguishable shade of red. There is a better chance of seeing this red alga in the middle of summer when temperatures are highest.

However, under a microscope, the red algae are not actually red! In fact, they are green. Like humans, they need protection from the dangerous ultraviolet light of the sun. Their unique color comes from carotenoids, the same pigment that makes pumpkins and carrots orange. Carotenoids absorb the UV light and live inside the algae’s chloroplasts -- a structure within cells that is responsible for photosynthesis.

Why Are Scientists Concerned?

A study in 2016 showed that snow algal blooms lessen the amount of light that snow reflects by as much as 13% in a single season.

Researchers are also worried that these red algae will cause a loop of warming and melting, and worsen the effects of climate change. When it is warm, the algae bloom and absorb more sunlight. This, in turn, causes more ice to melt and leads to more algal blooms. We can expect to see the algae numbers keep increasing as Antarctica gets warmer and warmer.