Clouds On Jupiter? Or A Painting? 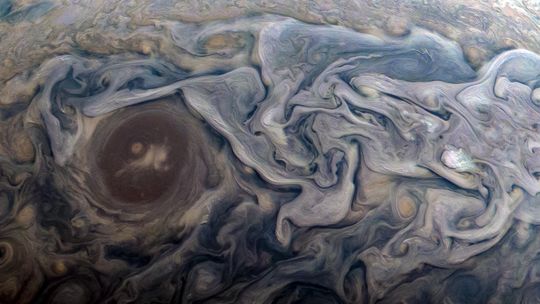 An image captured earlier this year of Jupiter’s clouds show that we may have art there before we can have humans there!

The photo, captured by NASA, has been described by many people as similar to Vincent van Gogh’s paintings.

The photos were captured by a spacecraft named Juno, about eight thousand miles above the clouds, and color enhanced by NASA engineer Kevin M. Gill. The clouds in the photo are storm clouds that scientists have been studying and trying to understand the life cycles of. Some of the storms caused by these clouds are so large that they could swallow Earth several times over!

Juno’s mission is highly unusual- as compared to most spacecrafts which have dedicated teams of engineers following and tracking each photo taken, the images taken by Juno are interpreted and spread by amateur artists and engineers to the general public. According to scientists, the results have been amazing, allowing them to see new patterns and possibilities about Jupiter’s mysteries they’d never have discovered otherwise.

Juno is about halfway through its mission in which it skims over Jupiter’s clouds once every 53 days. Once its mission is complete, Juno will self-destruct by flying into Jupiter’s atmosphere to avoid contaminating the sixty-three moons that orbit it.

"It's really exciting to see what we can see out of an engineering camera, and we're really erasing all the boundaries between who or what can make a contribution to engineering or science or art." said Heidi Becker, Juno’s radiation monitoring investigation lead at a press conference last year.