The Debate Over A Feather 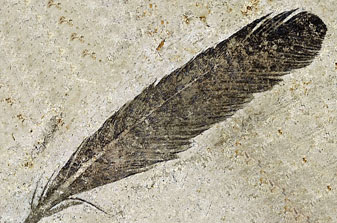 A feather is just a feather — unless it has been estimated to be 150 million years old!

This feather has been the center of a controversial debate ever since it was uncovered over a century and a half ago. Does it belong to an Archaeopteryx lithographica, a bird-dinosaur?

New analysis and research by a team of archaeologists may have finally settled that debate. According to the study published in a journal called Scientific Reports, the fossil is indeed an Archaeopteryx feather.

What exactly was an Archaeopteryx?

In short, the Archaeopteryx lithographica was a crow-sized feathered dinosaur. It had a combination of dinosaur characteristics (like sharp teeth) and bird features (like wings and hollowed bones) makes it a likely ancestor of modern-day birds. Thus, it served as a missing link between dinosaurs and birds.

However, when the fossilized feather was first unearthed from German soil back in 1861, the archaeologists didn’t find any skeleton to go along with the amazingly preserved fossil — hence, the debate on the true origins of the feather.

Has this new study successfully settled the historic debate? The authors from the 2019 study recently reported that they are already drafting a response — so the argument might not be over yet!