A Mysterious Structure In A Desert! 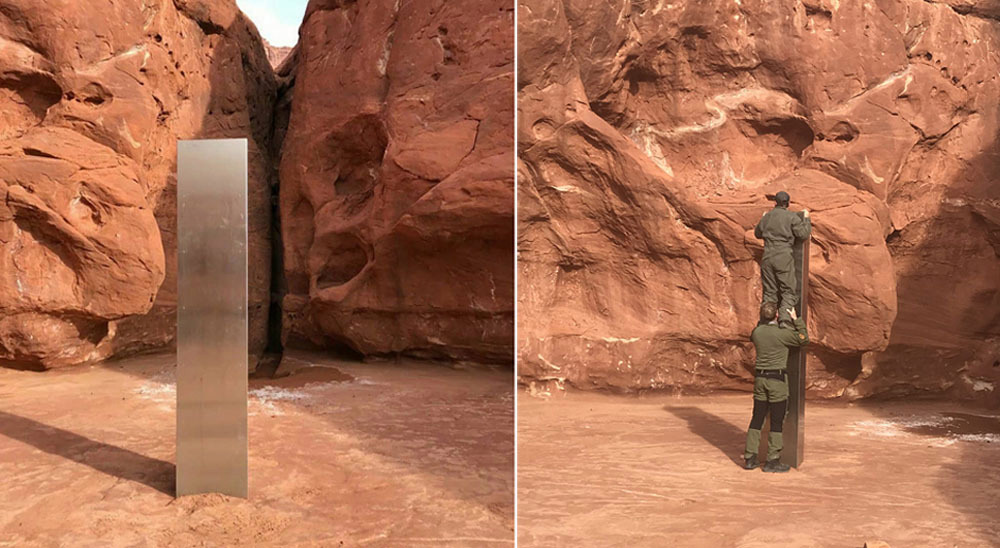 Some say the monolith is just a piece of art. Others propose it’s something from science fiction. There are even those who say it’s the work of aliens!

However it came to be, a helicopter team discovered this tall metal monolith during a routine sheep-counting expedition over the southeastern Utah desert on Wednesday, November 18. The origin and creator of the monolith are still unknown.

The group that made the initial discovery was composed of officers from the Utah Department of Public Safety (DPS) Aero Bureau, who were out in the helicopter to help the Division of Wildlife Resources tally up the region’s native bighorn sheep. It was in the middle of the count that a biologist on board first spotted the mysterious structure, prompting the helicopter pilot to fly them all down for a closer look.

At 3.6 meters high (between 10 and 12 feet tall) and reportedly made of stainless steel, the monolith was a strange sight to behold in the middle of Utah’s Red Rock Country. This giant metal monolith appeared to be driven straight into the earth, at the bottom of one of the many shallow ravines in the area.

Aside from its appearance, the monolith was also striking for its location — the remote Utah desert, with few roads by which a person could make their way out to place such a structure.

No one has stepped forward to take credit for the piece, either, leaving people to develop their own theories on who was responsible for the structure. Some believe the perpetrator was an artist, or a fan of the well-known science fiction movie 2001: A Space Odyssey, which features a mysterious giant monolith. Others joke that the installation might have been planted by aliens.

But now, with curious sightseers flocking to the remote area, the monolith has disappeared as suddenly as it appeared. However, we know who was behind the disappearance. Two athletes hauled away the structure in the middle of the night because of the damage to the landscape by visitors.

Finally, no matter how cool or mysterious the monolith may seem, Utah DPS also released a reminder that placing structures or art on federally managed public land is illegal without authorization!