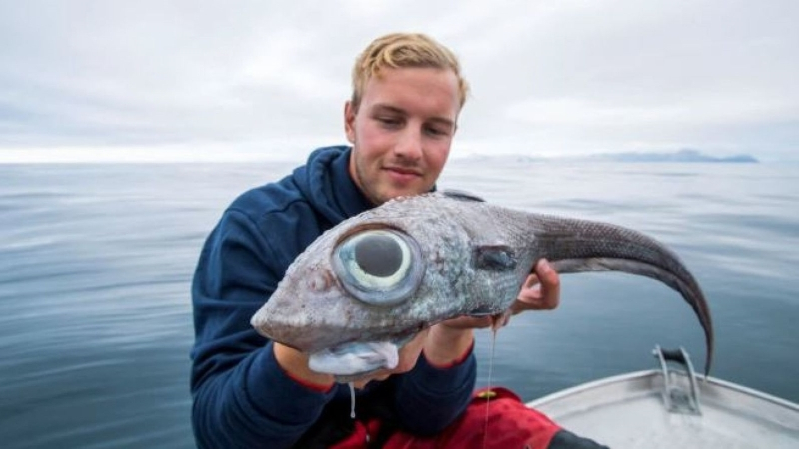 Imagine sailing on a boat with a captain as he recalls his encounters with “sea monsters.” He mentions an unearthly fish with enormous eyes, a slippery mouth, and a slithery tail. You might laugh and shout “never in a million years.” And guess what― you’re right!

This strange fish didn’t just appear a million years ago. It’s been swimming in the dark depths of the ocean long before the existence of the dinosaurs.

On September 16, 19-year-old Oscar Lundahl was in for a big surprise while working for the Nordic Sea Angling fishing company. He was fishing for the rare blue halibut off the coast of Andoya, an island in Norway. But on his mission, he ended up catching the ratfish.

With four hooks on a line and 30 minutes of struggle, Lundahl reeled the creature from approximately 2,600 feet (800 meters) deep. Because the ratfish lives in deep waters, it died due to the sudden change in pressure as it was brought up, so Lundahl cooked it up for a tasty meal at home.

Ratfish, or Chimaera Monstrosa Linnaeus, are primitive creatures and relatives of sharks, resembling both sharks and rays. Their Latin name is derived from a Greek mythical monster with a lion’s head, a goat’s body, and a dragon’s tail. They are found in temperate to cold waters, and in oceans as well as rivers.

Despite their frightening appearance, ratfish only eat crustaceans and other bottom-dwellers. In order to crush the hard shells of their prey, they use rodent-like teeth, which is what the name “ratfish” refers to. Ratfish swim in dark deep ocean waters globally, so they need huge eyes to capture enough light to see. Because they live near the bottom of the ocean, ratfish are equipped with electrical sensors on their noses that sense the ocean floor and detect prey based on its heartbeat or any muscular movements.

Ratfish might be some of the oldest and most mysterious fish in the world. However, only 5% of oceans have been explored, so we don’t know what other perplexing creatures are down there!