A Whale That Could Walk! 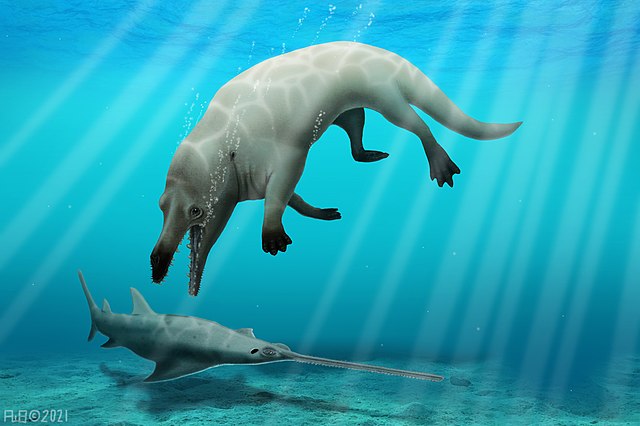 A new four-legged whale species was recently discovered by a team of researchers in Egypt. The fossil which was encased in a tomb of rock dates back to over 43 million years ago!

This ancient creature had four functional legs, so it could dwell on both land and in water. Ironically, Egypt's Fayum Depression, the desert where the fossil was discovered, was an ocean millions of years ago.

Researchers believe this fossil is an example from an era when land animals were adapting to marine life. Modern whales evolved from deer-like land mammals over the course of millions of years, and this unique whale could travel across land and swim in the ocean.

The new species is named Phiomicetus Anubis because the whale’s skull resembles the Egyptian jackal-headed god of death, Anubis. Scientists have also been able to recover the whale’s partial skeleton. They deduced that the ancient whale was approximately three meters in length and weighed 1,300 pounds. The mammal had a long mouthful of teeth, which indicated that it fed on smaller mammals and other sea life.

After analyzing the remains at Mansoura University in the Nile River Delta, scientists speculated that P. Anubis is the oldest semi-aquatic whale species found in Africa. Although the fossil itself was discovered thirteen years ago, researchers just completed the analysis and made the exciting announcement of a new species. Other whale fossils with legs have been found before, but the P. Anubis is the earliest of its kind found in Africa.