What Are The Santa Ana?

It has been a fiery few months in the U.S state of California. Just last month, several counties in Northern California were ravaged by fires.

Now, we are seeing dramatic and scary videos and pictures of the Southern California wildfires.

Fires have broken out in Los Angeles and Santa Barbara counties, the worst being the Thomas fire in Santa Barbara. More than 95,000 residents have been evacuated, and 1000 structures have burned down.

Do you ever wonder how the fires can grow so big so quickly? In general, winds will fan fires, causing them to grow but specifically in California, the Santa Ana winds are the primary reason.

The Santa Ana winds are katabatic winds that originate over the Great Basin - a large area covering most of Nevada and half of Utah, as well as portions of Idaho, Wyoming, and California. They flow westward towards the lower pressure areas of the California coast.

These hot, dry winds have gusts that can reach hurricane speeds. Its heat and extreme dryness will desiccate vegetation in its path, providing fuel for fires. The gusts also carry burning debris to new areas, helping to spread fires quickly. Let’s look at how the Santa Ana winds acquire their characteristics of heat, dryness, and speed. 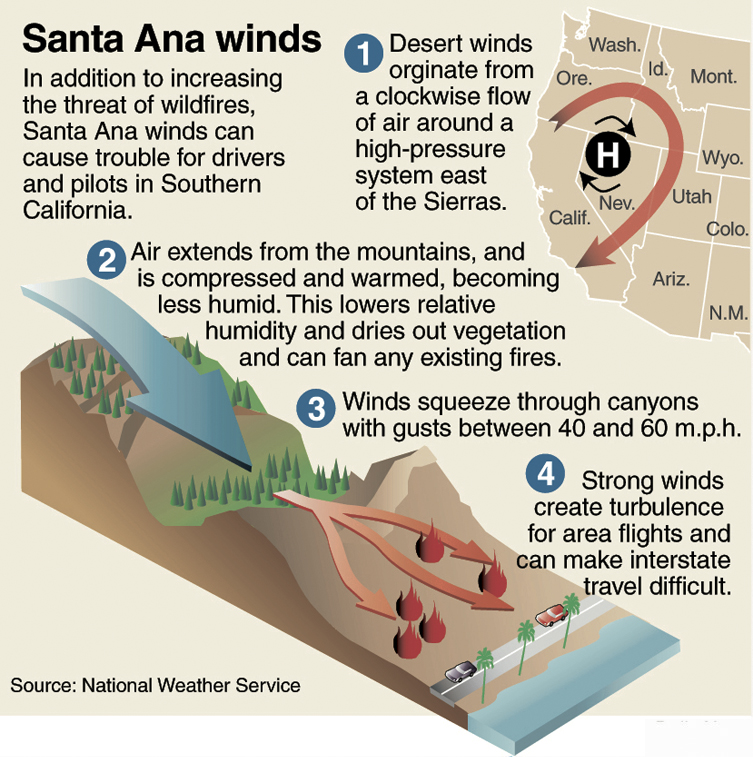 Heat - The air starts off cool, or even cold, in the Great Basin but as it flows down the slopes of the Sierra Nevada and other California mountain ranges, it compresses and heats up by 30 degrees Fahrenheit for every mile that it descends. The highest peak in the Sierra Nevada is almost 3 miles high.

Dryness - The amount of moisture in the air remains the same as it flows downwards, but when the air becomes warmer, it can hold more moisture. That means the relative humidity drops - the air is considered drier because its capacity for holding moisture has increased even though the actual amount of moisture hasn’t changed.  Dry air will try to pull moisture from wherever it can, such as plants and even people.  Ever notice how dry your skin feels during low humidity days?

Speed – As the winds flow downwards, it gets funneled through mountain passes and canyons. Think of the time you played with a garden hose and put your thumb over the opening to cover it up. The water spurted out of the garden hose much harder and faster. This is similar to what happens as the winds are forced through the narrow passes and canyons.

Unfortunately, with no immediate sign of rain and the Santa Ana winds expected to gain strength again, the fires continue to be dangerous and unpredictable.