Have You Heard Of Hair Ice? 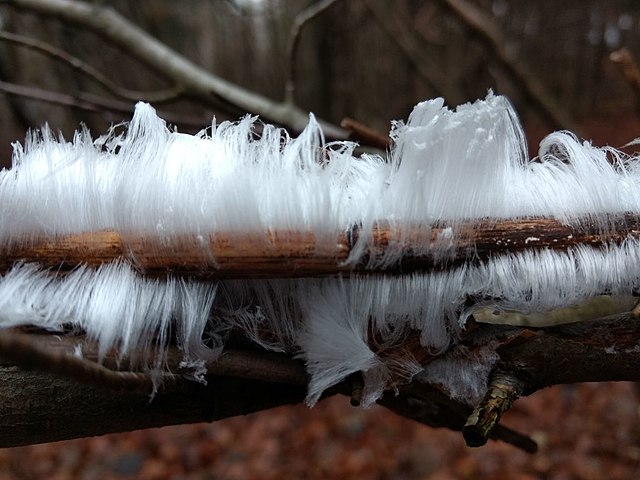 We know what you're thinking. No, hair ice is not something out of one of Dr. Seuss’s books. It’s a real phenomenon that has been spotted by biologists in parts of Europe, India, and the US!

Recently, as hikers took a walk through a forest in Ireland, they encountered wisps of the mysterious frost sprouting from the bark of tree branches.

The culprit, as it turns out, is a fungus. Though scientists are still uncertain of exactly how the fungus transforms ice into silky strands, they have a hypothesis.

A Magical Mane of Ice

Typically found at latitudes between 45º and 55º above the Equator, hair ice has been spotted in tens of countries including France, Germany, the UK, Sweden, and Canada. The fine hairs of this ice form on rotting wood at temperatures close to 0ºC, typically on winter nights when the air is humid.

The “cotton candy” ice has smooth, shiny fibers that typically range from 0.01-0.02 mm in diameter. However, they are so fragile that they melt away at a single touch or ray of sunlight, similar to how cotton candy instantly dissolves in water.

The phenomenon was first observed and analyzed by German scientist Alfred Wegener in 1918, but it was not until almost a century later until Swiss professor Gerhart Wagner discovered a connection with a fungus that inhabited wood under the ice. Of course, later in 2015, scientists discovered the culprit was the fungus, Exidiopsis effusa.

Scientists hypothesize that the fungus uses proteins, similar to those found in antifreeze liquid, to prevent the hairs of ice from sticking together. The initial layers of the ice form through a method of “ice segregation”. It occurs when water near a branch freezes in cold air and is suctioned through the bark’s pores, or microscopic holes, forming a narrow sheet of ice.

So, next time you step out for a stroll in the woods, keep an eye out for the fascinating filaments of ice that may add a little more magic to the winter wonderland around you!

A Fungus That Feasts On Plastic! (12)