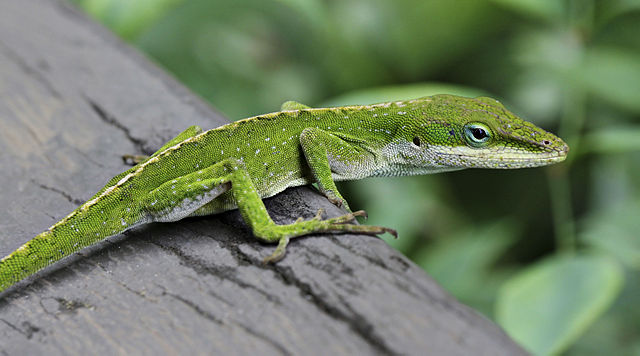 You may have heard of natural selection through Darwin’s study of finches on the Galapagos Islands.

But did you know that hurricanes may have led to a new generation of lizards that evolved to have enlarged toe pads?

Scientists were studying the anole lizards in the Caribbean which had been hard-hit by two large hurricanes in 2017. They noticed that the reptiles had developed larger and grippier toe pads, which they then passed onto their offspring.

These relatively recent hurricanes had managed to alter the long term traits of an entire species!

Dr. Colin Donihue, an evolutionary ecologist at Washington University, was in Turks and Caicos studying anole lizards for a conservation project when Hurricane Irma and then Hurricane Maria hit. Both were category five hurricanes that caused mass casualties.

Many structures and trees fell, and the lizard population dwindled. However, the lizards that did survive had generally bigger and stickier toe pads, which led Dr. Donihue to consider a correlation between the two. Dr. Donihue simulated hurricane conditions using a leaf blower and captured how the lizards clung to a stick against the intense winds.

A year and a half later, Dr. Donihue went back to Turks and Caicos to see the new generation of anole lizards. Like their parents, they too had the familiar large and sticky toe pads. Natural selection had allowed their parents to survive the hurricanes, who could then pass this hereditary trait and advantage to their kids.

With some other researchers, Dr. Donihue traced seven decades worth of hurricane data and found that lizards in other Caribbean islands hit by two or more hurricanes also had this trait. By this point he had analyzed almost 200 different anole lizard species for his research, ranging from Florida to Brazil.

This in-depth study shows how extreme weather events can alter evolutionary processes in multiple locations. Dr. Donihue hopes other evolutionary biologists will expand on this idea and look for this pattern in other species, like birds and trees.

With extreme weather storms more likely due to climate change, there will be more chances to explore this and the evolutionary resilience of the Earth’s species.