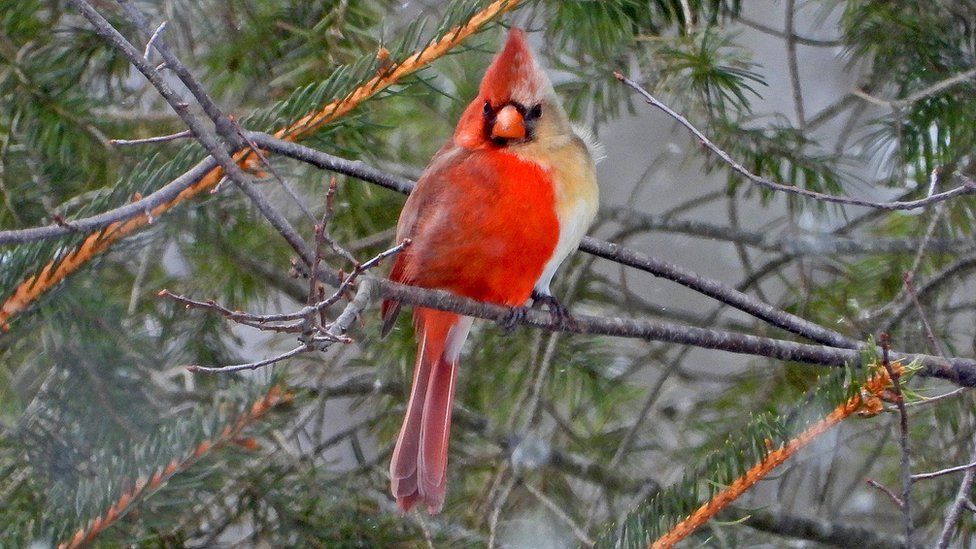 When Jamie Hill saw a photograph of a peculiar-looking cardinal, he first thought that it had lost pigmentation (skin color) in some of its feathers.

One-half of the bird was the customary bright red color you would see on Christmas cards. But the other half was a muted taupe brown. Hill was a retired ornithologist (expert on birds) and this particular bird caught his attention. He rushed with this camera to snap photos of the bird himself.

That's when Hill realized that he had captured something very rare, and far more extraordinary. The bird was half male and half female!

Male Northern Cardinals come in striking black and crimson colors, while females have shades of brown and hazel. What made this particular bird rare was that not only did it have both color patterns, it was divided down the middle into male and female sides.

Animals and birds that exhibit these characteristics are called gynandromorphs (pronounced as gi-nandro-morf). "Gyn" is Greek for female, "andro" is male, and "morph" means variety!

Though gynandromorphism is rare, it has been observed in multiple other species, including zebra finches, spiders, and butterflies. It is easier to notice in species where the males and females are visually different from each other. This was the case with the Northern Cardinal.

So how does such a bizarre phenomenon occur? A little biology will help us understand what is happening!

The opposite occurs in birds, who have Z and W sex chromosomes. Females have individual Z and W copies, and males have two Z copies. When two birds mate, the male passes on Z chromosomes, while the female egg will have either the Z or the W chromosome.

However, sometimes a female egg cell might have two nuclei by mistake -- one with Z and the other with the W chromosome. When this is fertilized by two Z-chromosomes from males, the result is half male and half female.

While gynandromorphic animals lead a normal life, they usually do not produce any offsprings. Now that you know, the next time you see an unusual-looking bird, remember to take a picture!